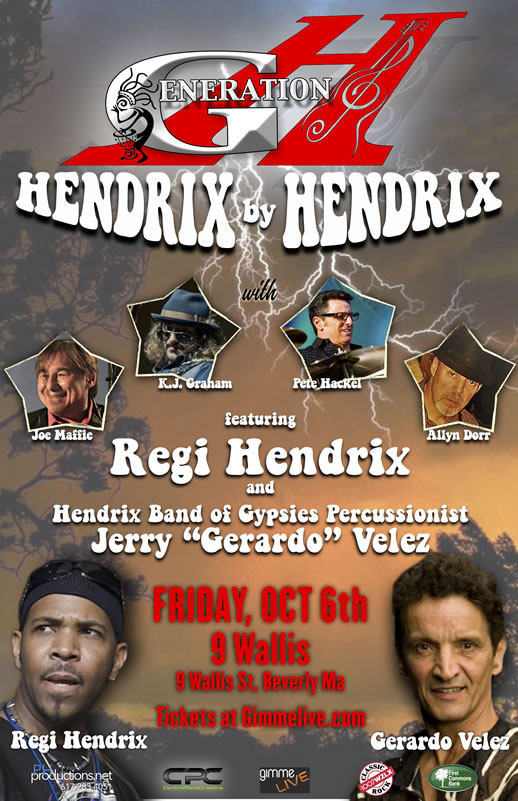 Generation "H" is the new collaboration between Gerardo "Jerry" Velez, original percussionist, close friend and band mate of Jimi Hendrix (Woodstock and beyond), along with artist, writer, musician and the next generation of "Hendrix", Jimi's second Cousin...Regi Hendrix!

"The DNA, artistic depth and creativity that flourished in Jimi is shared by his Cousin Regi". says Velez. "Regi is his own man; his artwork, books and music are part of the next generation of the Hendrix legacy."

Velez continues "Since the 70's I have been waiting for that special connection to happen where we would revisit Jim's music and tap back into the adventurous spirit that fueled us. That time is NOW and that IS...Generation H".

Together Velez and Hendrix re-craft the iconic songs of Jimi Hendrix, Woodstock and beyond. Along with their multi piece backing band, Generation "H" brings to the stage their own brand of magic through original music and song. 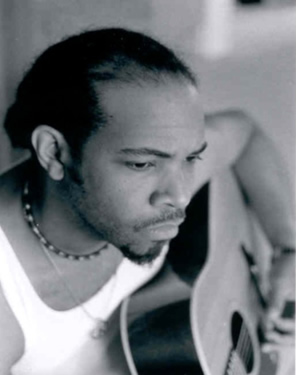 Regi Hendrix, 2nd cousin of Jimi Hendrix, is a seasoned vocal and guitar veteran. He grew up and still resides in upstate N.Y. and continues to display his wide array of talents locally and internationally. Locally, he has spent time performing in a Jimi Hendrix tribute band, The Regi Hendrix Band, while writing, refining and recording his original material. He has performed with artists such as Greg Howe and Carl Roa, Craig Erickson and Don Mancusso. He is also a featured vocalist on the Jimi Hendrix tribute album, "The Spirit Lives On", where he sings "Bold as Love" and the Gary Moore tribute "Give us Moore" where he sings, "Reach for the sky."

Aside from being a multi-talented musician and songwriter, Regi has written "Deity" his book that deals with the very foundation of modern-day religion and is now working on its sequel. He is also a painter working on a collection in commemoration of the 50th anniversary of his older cousin's death entitled Hendrix-by-Hendrix "The Room Full of Mirrors" collection. There is no denying the artistic spirit and musical integrity Regi has inherited from his older cousin which is defined in his music, writing and art.

Regi's latest musical journey is a collaboration with original Band of Gypsies percussionist Gerardo "Jerry" Velez and their project Generation "H" which pays tribute to the music an legacy of Jimi Hendrix. 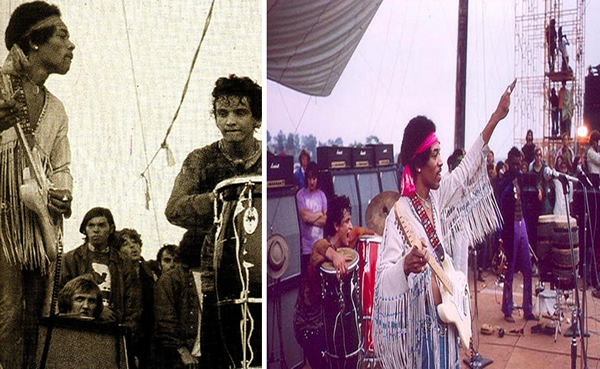 When Jimi Hendrix took the stage at Woodstock and pointed to the crowd, a young, 21-year old was standing behind him. That person was Neophyte percussionist Gerardo "Jerry" Velez on a day in musical history which also documented Jerry's first professional performance and his 21st birthday!

Since then, Mr. Velez has energized stages worldwide, performed in front of countless audiences including Monarchs and Presidents and has topped the Billboard® charts with gold and multi-platinum selling records earning him 7 Grammy nominations.

From prestigious stages to mud soaked fields like the one at the beginning of his professional career and six decades in the business, Mr. Velez's journey has included all genres of music including collaborations with artists such as David Bowie, Sir Elton John, Joan Baez, Duran Duran, Slash, Stevie Wonder, Mick Fleetwood, Spyro Gyra and many more.

Mr. Velez is now the driving force behind the creation of "Generation H" his latest musical journey and collaboration with Regi Hendrix (cousin of Jimi) which pays tribute to the music an legacy of Jimi and the greatest musical era of our time.