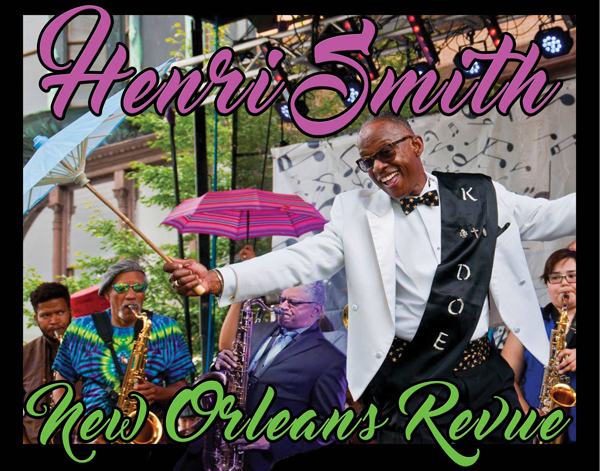 On the 10th anniversary of his spectacular show headlining Celebrate Gloucester, New Orleans Singer and Bandleader Henri Smith (who now lives in Gloucester) brings the spirit and soul of New Orleans to the big stage once again featuring Grammy-winner Amadee Castenell.

Henri and his band sold out 2 shows at the Gloucester Stage Company last year. Don't miss your only chance to catch them on the big stage this year in a safe, spectacular environment!

To say that Henri Smith carries the torch for New Orleans is an understatement. Here's what New Orleans Legends say:

Born and raised in New Orleans' 13th Ward, Henri Smith grew up a music fan, but resisted performing for much of his life. As a boy, he was surrounded by musicians--The Neville Brothers, Papa French (of Preservation Hall Jazz Band), Dave Bartholomew, Fats Domino and many others. Henri's mother encouraged him to sing, which he did, but only in church. He also studied piano, at his mothers insistence, but in high school that conflicted with his first love, football. Football won.

After serving in the Army, Henri went home to coach and teach music camp. Plus he landed a DJ job at the famed New Orleans Jazz station WWOZ, on which he interviewed old friends and made many new ones, all of which led to his becoming the host of The New Orleans Jazz and Heritage Festival (Jazz Fest).

At the 1999 Jazz Fest, Kermit Ruffins (featured on the HBO hit series Treme) surprised Henri by calling him to the stage and asking him to sing. He got a standing ovation.

In 2001 friends convinced Henri to record a CD with many of them as guests, including Kermit Ruffins, Donald Harrison Jr, Jason Marsalis, Wendell Brunious, Tuba Fats and Cecil Brooks III, who says of Henri, "he's on the way to becoming one of the great American singers."

Hurricane Katrina changed everything. In one terrible blow, all of Henri Smith's responsibilities were washed away. His father safely in Atlanta with his sister, Henri was free to leave town and visit friends north of Boston. "I decided it was finally time for me to follow my dream," says Henri. "I prayed for the Lord to send me musicians from New Orleans."

Henri's prayers were answered. He re-connected with Grammy-Award-winners Charles Neville and Amadee Castenell, along with many others who had left New Orleans.

Henri brings these old friends together with new friends from the north of Boston's burgeoning music scene to fashion a unique sound for his new northern fans.

In 2014, Henri released That's When I Know It's Mardi Gras, a live CD recorded at Beverly's Larcom Theatre, produced by Peter and Vickie Van Ness and featuring Henri on vocals with Grammy Award-winners Charles Neville and Amadee Castenell on saxophone and flute.

from HBO's Treme: Amadee Castenell on right in light blue suit & bow tie
Rescheduled New Date TBA
"When Amadee was in New Orleans we didn't leave home without him. He is our favorite saxophonist."

Amadee Castenell is a premier tenor saxophonist and flautist who has been nurtured by 30+ years of playing in the rich multi-layered music scene of New Orleans and appeared in HBO's hit series Treme.