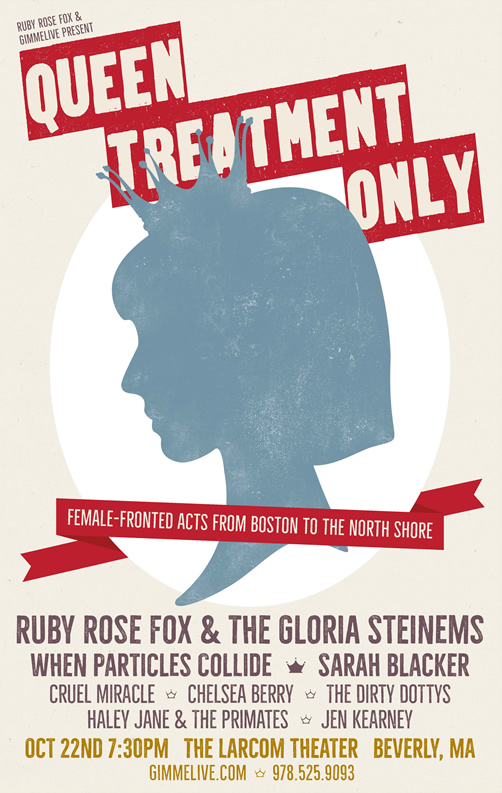 Award-winning Boston songwriter and vocal powerhouse, Ruby Rose Fox, is teaming up with gimmeLIVE to present the first Queen Treatment Only Festival featuring top female artists from Boston to the North Shore in the most intimate, acoustically stellar listening room north of Boston.

This is a one-of-a-kind ALL AGES event bringing women together for a great night of original music (see videos).

Events like this can pave the way for the next generation of girls and women who want to make independent music without apologies, fear or rules. Come support these amazing female artist!

CLICK ON THE ARTISTS BELOW TO WATCH THEIR VIDEOS

Ruby Rose Fox, a vocal powerhouse of soul-driven, edgy rock 'n' roll (with a nod to new-wave pop), whose voice threatens to knock down the walls of any room in which she performs is hard at work to make 2016 her strongest year of new releases and live performances.

In July & August 2015 Ruby Rose Fox was both the Improper Bostonian magazine's pick for Best Musician of 2015 in the "Boston's Best" issue, and featured on the cover of its 2015 "Music" issue.

Ruby also took home the "Best Pop Artist," and "Best Female Vocalist" honors at the 2015 Boston Music Awards, and was named "Female Performer of the Year," by the 2016 New England Music Awards.

The Boston Herald describes Ruby Rose Fox's music as "arty, edgy rock 'n' roll that lets her be Lou Reed and Nico at the same timeâ€¦ [and seems] to come from another scene, another world."