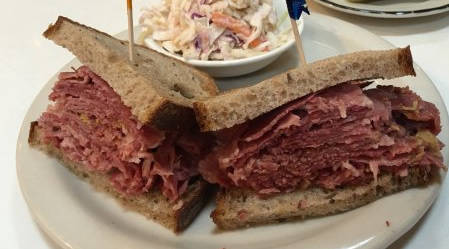 How can it be St. Patrick's Weekend without corned beef? Now you can enjoy a delicious corned beef sandwich and coleslaw (from Gloria's our local deli on Rantoul Street) as you relax and get ready for the Rollicking Irish Comedy. Available by PRE-ORDER ONLY through Friday 3/17 at noon. We can't take orders at the show.

Here's a quick excerpt from Frank McCourt's Pulitzer Prize winning book "Angela's Ashes" where he recounts a day when his mother brought home some corned beef:

It isn't corned beef at all. It's a great lump of quivering gray fat and the only sign of corned beef is a little nipple of red meat on top. We stare at that bit of meat and wonder who will get it. Mam says, That's for Alphie. He's a baby, he's growing fast, he needs it. She puts it on a saucer in front of him. He pushes it away with his finger, then pulls it back. He lifts it to his mouth, looks around the kitchen, sees Lucky the dog and throws it to him.

This Pre-Order Corned Beef Sandwich is an extra $8.00 per ticket.

WICKEDLY FUNNY!
- Time Out New York
If you don't have a good evening, you should have yourself checked to make sure you haven't died during the day.
- Malachy McCourt
THANKS TO OUR SPONSORS~YOU HELP KEEP LIVE MUSIC ALIVE! 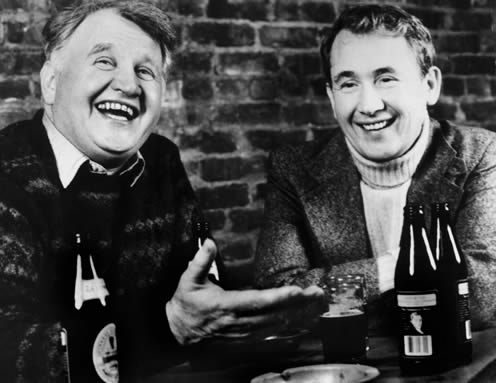 MEMORABLE! The brothers McCourt bring their two best selling books to the stage... the show has a roguish appeal

An unholy amount of charm!

Mixes the sweetness and kick of an Irish coffee

WINNING! You don't have to be Irish to appreciate the wry sense of humor of the brothers McCourt. A GREAT DEAL OF FUN!

"A Couple of Blaguards" is a two-character comedy with incidental music, created by the brothers Frank McCourt and Malachy McCourt. These master raconteurs have laced their combined experiences growing up in Ireland, and their escape to America into a vaudeville of comedy, Irish songs and a gallery of relatives, rogues, fools and petty tyrants -- priestly and otherwise.

"A Couple of Blaguards" with Howard Platt and Jarlath Conroy as the lads, is so funny and plays well in the mind's eye that it isn't until you're half-way out the door that you realize how tough and unsentimental it is. The boys have seen so much that there can be no more tears: All that's left to do really is laugh and keep moving.

Frank McCourt is arguably the literary phenomenon of the '90s winning a Pulitzer Prize for his book, "Angela's Ashes."

Like their best-selling books, Frank McCourt and Malachy McCourt's A Couple of Blaguards is an autobiographical account of their years growing up in poverty in Ireland. Though times were tough in Limerick, the tales spun by the brothers McCourt simmer with bittersweet recollections, ferocious humor and a parade of colorful characters from the priest who warns of sinners' eyeballs exploding in Hell to the McCourt grandmother who spits on Franks unruly Presbyterian hair to tame it.

According to Malachy McCourt, This show is the result of Frank and me listening to the stories of our elders which in turn tunes the ear, the eye and the tongue to observe and give voice to even the most trivial of events. I think we had more fun than anyone writing and performing Blaguards, which has become an affectionate term for the rowdy, outgoing, and sometimes drinking sort of boys. If you don't have a good evening, you should have yourself checked to make sure you haven't died during the day.