"Joe is one of our favorite performers at Buddy Guy's Legends"
- Buddy Guy
"CHICAGO BANDLEADER JOE MOSS has come up with a monster Memphis groove...developed a funky soul-blues sound...a skilled craftsman"
- Chicago Sun Times
THANKS TO OUR SPONSORS~YOU HELP KEEP LIVE MUSIC ALIVE! 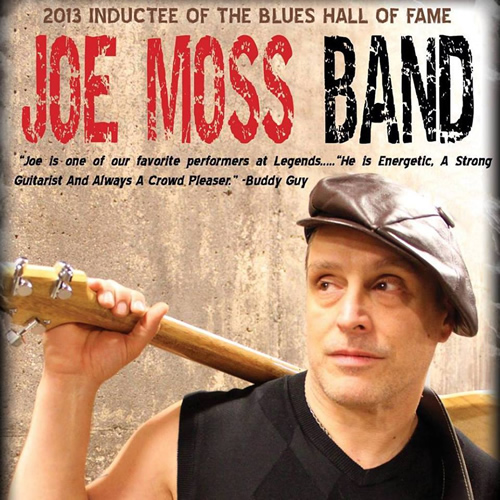 Few blues performers walk the walk to the degree of Chicago based guitarist/bandleader Joe Moss. One of the hardest working performers on the scene today. Not just an imitator of the music's glorious past, he strives to find his own sound and material within the styles he chooses to play. And the music world is taking notice. In 2013 Moss was inducted into the Blues Hall of Fame. The band is tight, featuring some of Chicago's finest blues musicians. A talented singer, writer, and guitarist, Joe is a consistent and entertaining performer with a monster groove.

2013 Inductee into the Blues Hall of Fame!
A guitarist since the age of 10, Moss was given his passport into the blues world by Buddy Scott, who noticed Moss at a jam session at Rosa's Blues Lounge in Chicago. Soon, Moss was playing seven nights a week as a member of Buddy's Rib Tip band. Moss' guitar skills quickly became notorious on the local scene and made him an in-demand sideman. In 1996 Joe started his own band and has recorded and toured constantly to date. Some of the people he had the pleasure of playing with include: Buddy Guy, Little Milton,Willy "Big Eyes" Smith, Lurrie Bell, Zora Young, Charles Wilson, Lil' Smokey Smothers, Syl Johnson, Big Time Sarah, Barkin' Bill Smith, Lefty Dizz, Magic Slim, A.C. Reed, Billy Branch,Walter Scott, Hollywood Scott, Mike Wheeler, James Wheeler and Little Mack Simmons. Joe has backed these artists all over the world. Joe has recorded 5 Albums with his own band The Joe Moss band.