We've partnered with local favorite Rasta Pasta (the people who served our delicious New Year's Eve Dinner that fans are still raving about!) to bring you a scrumptious pre-show Italian Dinner starting at 7:00pm

PLEASE NOTE: Your show ticket must be for a seat at a TABLE in order to get the Buffet Dinner. Dinner cannot be served to people seated in rows A through G.

This Pre-Show ITALIAN DINNER is an extra $19.95 per ticket.

JUST ANNOUNCED Boston's razor-sharp comic Xazmin Garza will open the show!
VINNIE FAVORITO UNFILTERED
PRE-SHOW ITALIAN DINNER AVAILABLE
Buy Tickets first. Then you can order the upgrade before you check out.
If you already have tickets CLICK HERE TO GET THE upgrade.
BUY TICKETS
BUY TICKETS

What Happened in VEGAS Comes to BEVERLY

Hollywood's top Celebrity Roaster, Vinnie Favorito, headlined in Las Vegas for 15 years. This Saturday he'll roast You like a Celebrity at his Valentine Cutesy Love Show!

"One of my favorite comics!"
- George Carlin

No two Vinnie Favorito shows are ever the same! Take your love to dinner on Valentine's Day and save your Saturday for Vinnie's Valentine Cutesy Love Show!

Known for his comedy roasts of such celebs as Tom Arnold, Magic Johnson, Pat O'Brien and even Larry King, Vinnie Favorito has a unique style of comedy. Scripted material just isn't a priority for this Boston-born comic who earned his stripes at the Improv and the Comedy Store in Los Angeles. Headlining Vegas since 2003, Vinnie has been performing in comedy clubs and on TV for more than 20 years.

If you're looking for safe and politically correct humor, then this off the cuff funny show probably isn't for you ... but if you want some edgy and raw unfiltered comedy with bite, Vinnie just might become your new Favorito.

WARNING: Vinnie Favorito intends to offend. If you are easily offended, go see another show. Must be 18 years or older to attend. 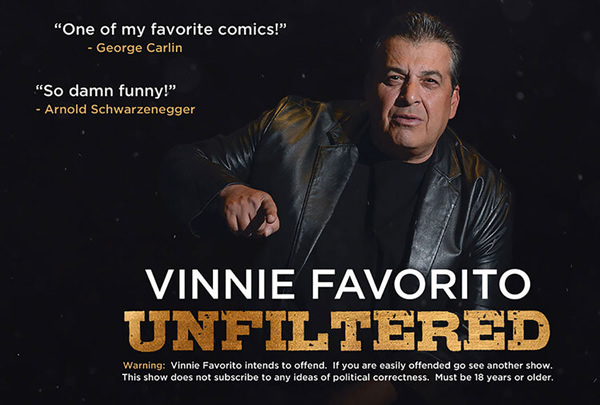 Most of stand-up veteran Vinnie Favorito's comedy comes from his finely honed ability to think on his feet. Scripted material just isn't a priority for this Boston-born comic who earned his stripes at the Improv and the Comedy Store in Los Angeles. On his second stage appearance ever, Favorito won a Top 40 Star Search Competition, simply on the strength of his natural wit. More than two decades after his auspicious debut, the comedian has been headlining in Vegas since 2003. Checking out this razor-sharp mind at work has some interesting consequences, as you just might find yourself the target of an old-style roast because Favorito is a master of crowd-work and audience interaction.

Favorito typically begins his routine with a monologue, not unusual in the stand-up world. But it gets progressively more interesting from there as the comic then focuses on the audience, targeting many of its members. No one is safe from his comic insults (and yet, everyone seems to love it). The fun element with Favorito comes not just from his insults, but because he mixes them in with sharp observations on current events.

Don't be surprised if you find yourself being compared to the latest political or celebrity scandal monger, which keeps every show he does fresh and unique. Favorito has been known to roast such celebs as Tom Arnold, Magic Johnson, Pat O'Brien and even Larry King, but non-famous audience members aren't safe from his laser-sharp insults either. It doesn't matter how respectable you really are; Favorito will find a way to show you how to laugh at yourself.

You might already be familiar with Favorito, as he's appeared on the Best Damn Sports Show Period, The Late Late Show with Craig Kilborn and a variety of Comedy Central shows. He's been performing on television and in comedy clubs for over 20 years. If you're looking for safe and politically correct humor, then this off the cuff funny show probably isn't for you ... but if you want some edgy and raw unfiltered comedy with bite, Vinnie just might become your new Favorito. 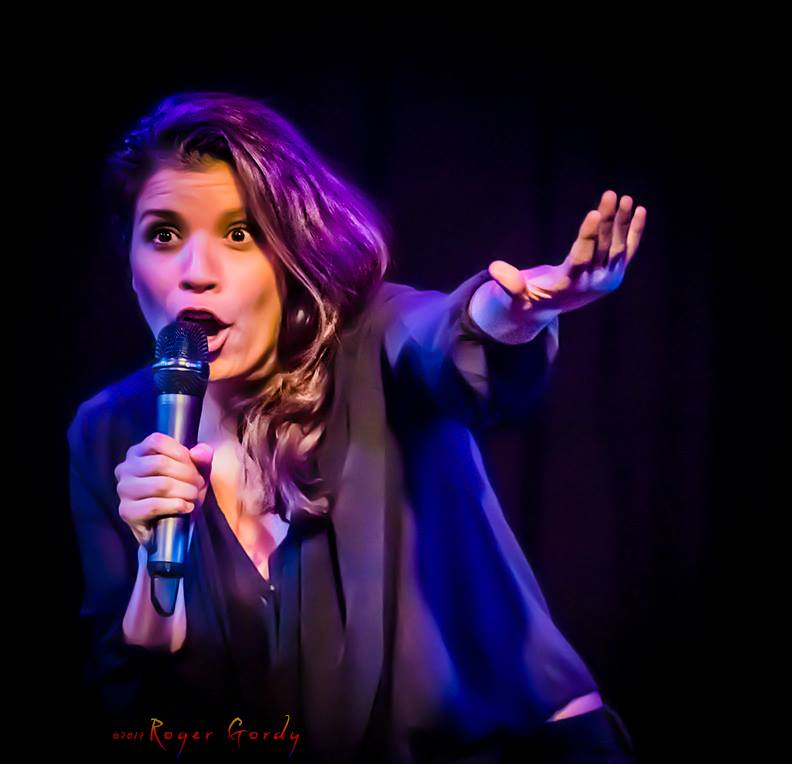 Xazmin Garza has distinguished herself among New England's strongest comics with her razor-sharp joke writing and dynamic stage presence. Interrobang called her "frank and hilarious," naming her a Boston comic to watch.

Garza deftly tackles subjects like racial identity, feminist politics, and modern relationships with an unapologetic edge that delights audiences of all colors and backgrounds. She is Mexican-American and was raised in Utah, which shaped her very unique perspective and original voice.

She has performed in the Limestone, Laughing Skull, Rogue Island, and Boston Comedy Festivals. Garza was also selected to be a 2017 Comic In Residence at The Comedy Studio in Cambridge, Massachusetts, and her comedy has been featured on SIRIUSXM.