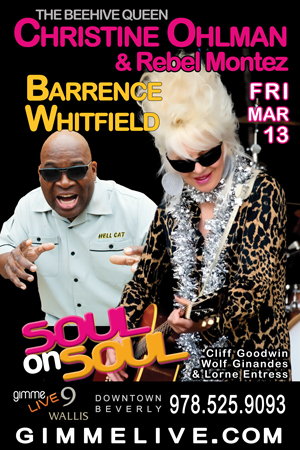 PLEASE ARRIVE at 7:00pm for the VIP Party.

This Pre-Show VIP Meet and Greet UPGRADE is an extra $20.00 per ticket.

Critically Acclaimed Shows ... Up Close & Personal
CHRISTINE OHLMAN & Rebel Montez with BARRENCE WHITFIELD
LIMITED QUANTITY VIP UPGRADES AVAILABLE
Buy Tickets first. Then you can order the upgrade before you check out.
If you already have tickets CLICK HERE TO GET THE upgrade.
BUY TICKETS
BUY TICKETS
WATCH VIDEOS

Joining them onstage will be Cliff Goodwin, Wolf Ginandes and Lorne Entress--Boston-scene veterans all--for an evening that Ohlman and Whitfield promise will be emotion-packed, rockin', soulful-to-the-bone...and one-of-a-kind-memorable.

Don't miss your only chance to go soul-on-soul with two legends!