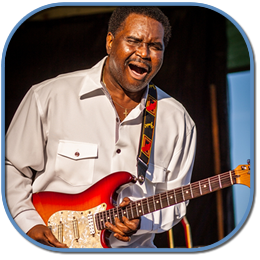 Chris Beard is a world class modern Blues guitarist, with a unique and compelling voice. Following the 80's model of Stevie Ray Vaughan which features a combination of traditional blues, high-energy guitar playing, and a contemporary edge, Chris Beard is able to traverse the recent blues past and propel his audience into the future.

See this fascinating, in-depth interview that A.J. Wachtel did with Chris Beard in Blues Blast Magazine

Chris Beard grew up in a house filled with the blues, when music was in your DNA, then blues is who you are and what you do.

Chris Beard is a modern blues guitarist and singer like few others. His personal connections to the blues were forged with the living blues men he's sat with since childhood.

Born in 1957, Beard is the son of Joe Beard, a fine blues guitarist who grew up on Beale Street in the 1950's before moving to Rochester, NY. When family friends like Matt "Guitar" Murphy and Buddy Guy stopped by, young Chris became their willing pupil.

After years playing the clubs in and around Rochester, Chris was offered the opportunity to record. In 1998, he released his debut recording, Barwalkin', on JSP Records. That record earned Beard a W.C. Handy nomination as Best New Blues Artist. Chris produced his follow-up disc, Born To Play The Blues in 2001 to the critical acclaim of the blues press and earned Beard the title, Prince of the Blues. Then, in 2005, Beard released Live Wire, a stirring combination of live and studio performances for Northern Blues. Two more releases have followed, Who I Am And What I Do and Eye Of The Witch.

"Blues is my roots," says Chris. "I grew up as Joe Beard's son in the house of the blues. The influence of Buddy Guy has been major. All he has to say to me is â€˜Keep on doing what you're doing.' Matt always told me that the guitar has to become an extension of you. That will always stick with me."