Last year "acclaimed, red hot blues band" (Boston Globe) Delta Generators brought the packed 9 Wallis crowd to their feet! People have been waiting for their return and the wait is over. Now don't wait too long to get your tickets. Spring will be here before you know it!

"...the big blast of fresh air the blues-and-roots scene in the Greater Boston...area has needed for years"
--Frank-John Hadley, DownBeat
THANKS TO OUR SPONSORS~YOU HELP KEEP LIVE MUSIC ALIVE!

Award-winning Delta Generators released their latest lastest live album, "Live at the Spire" to critical acclaim last year. The album was recorded at The Spire Center in Plymouth, MA in front of a sold out crowd and was the first Delta Generators album with new singer/ harmonica player, Brian Templeton. Many know Brian from his former Boston-based band, The Radio Kings or from his great solo albums. 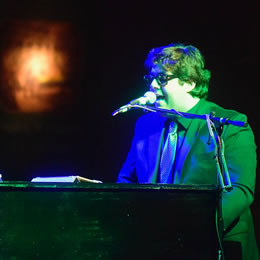