British-Invasion rock stars Badfinger in Beverly! Only Boston area concert on their U.S. tour. Hand picked by The Beatles - #1 hits: "Day After Day," "No Matter What," "Without You," "Baby Blue" and "Come And Get It" written by Paul McCartney!

THANKS TO OUR SPONSORS - YOU HELP KEEP LIVE MUSIC ALIVE!
BUY TICKETS

British Invasion rock stars, Badfinger, kick off GIMMELIVE's highly anticipated third season at Beverly's fully-restored, historic Larcom Theatre, performing ONE NIGHT ONLY. Hand picked by The Beatles, Badfinger was the first group signed to the Beatles' label, Apple Records and their first #1 hit "Come And Get It" was written by Paul McCartney!

George Harrison and Paul McCartney produced a string of world-wide Badfinger hits, including "No Matter What," "Day After Day," "Without You" and "Baby Blue", which hit the charts again in 2013 on the Breaking Bad soundtrack.

Badfinger started out in the early 1960s in Wales, England as a band called The Iveys. In the late 1960s after being signed to Apple Records, they had their first hit as the renamed band Badfinger with the chart-topper "Come and Get It". This first single was written and produced by Sir Paul McCartney and is the only song Badfinger recorded that was not written by a member of the group.

Badfinger members collaborated with Beatles members on several hits, including "Day After Day", which George Harrison produced for Badfinger, as well as appearing on George Harrison's All Things Must Pass album, John Lennon's Imagine album and Ringo Starr's single "It Don't Come Easy".

The name of the band itself also has it's Beatles influence. Badfinger stems from an earlier working title of the Beatles song "With a Little Help From My Friends" which was earlier referred to as "Bad Finger Boogie". Badfinger's string of successful hits have led them to be Apple Records best selling artist after the Beatles. Badfinger has had a lasting influence on music and their song "Without You" has been re-recorded by over 180 artists and became number one hits for artists Harry Nilsson and Mariah Carey. 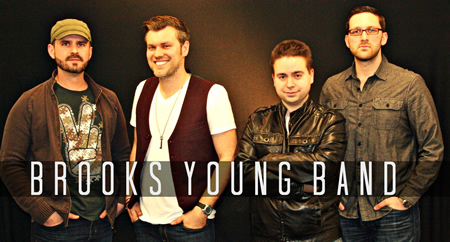 Hailing from Salem, MA, The Brooks Young Band saturate their songs with rock and roll edge and blues feel, going for a direct, emotional and powerful sonic blend.

Brooks' searing guitar leads and soulful vocal performances lock in perfectly with the solid rhythm section, creating an inspirational and uplifting sonic texture along the lines of influential performers such as Eric Clapton and Dave Matthews.

The Brooks Young Band has toured extensively throughout New England, sharing the stage with icons such as B.B. King, REO Speedwagon, Pat Benatar, The Wallflowers, and Boyd Tinsley of Dave Matthews Band. They have also had the privilege of performing for Vice President Joe Biden.

Find out more and let the music tell you the rest of the story! BrooksYoungBand.com